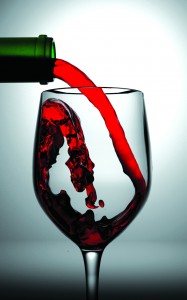 Description of Bordeux wine
The production of wine in Bordeaux region started right after the wine was introduced by the Romans and continues until our days very successfully.

History of Bordeux wine
After the mariage of Henry Plantagenet and Eleanor of Aquitaine in the 12th century, Bordeaux wines became very popular in England. After this marriage the province of Aquitaine become English territory, and the majority of Bordeaux production was exported. In 1337 the export of wine from Bordeaux was interrupted by the Hundred Year’s War between France in England, but by then Clairet was already very popular in England. After the war, in 1453, France repossessed the province and controlled wine production in Bordeaux.

In the 17th century Médoc grapes started to grow in Graves region by Dutch traders and dominated there until the nineteenth century then it was replaced by Cabernet Sauvignon. The wine classification by “châteaux“ in Bordeaux were started in 1855 and this classification remains till our days.

In the end of the nineteenth century vineyards of Bordeaux were ruined by Phylloxera infestations and only with the help of American rootstock the region‘s wine industry was resqued. Native wines were grafted on to pest-resistant rootstock, but this does not mean that contemporary wines from Bordeaux region are American wines, because rootstock does not make any affection for the production of grapes.

The taste of Bordeux wine
The wine from Bordeaux region can be the epitome of fine wine – it exhibit a wonderful complexity of aromas and flavours, great elegance and refinement and an ability to age gracefully – some for a hundred years.

Quality of Bordeux wine
The quality of wine production in France (in Bordeaux as well) is governed by a set of regulations called “Appellation Contrôlée”. In these regulations certain geographical district is covered. Bordeaux region is covered by AC Bordeaux and AC Bordeaux Supérieur, but the smaller areas also have their ACs, for example AC Fronsac, or AC Pomerol.

Cabernet Sauvignon grapes are grown up in the west of the river Gironde in vineyards Médoc and Graves. Merlot grapes are grown up in the east in Pomerol and St-Emilion. Because of the different soils and predominant grape variety the wines from each area have a different character. That is why sometimes they are called “left bank” and “right bank” wines. Bordeaux region produces both red and dry white wines.

More about Bordeux wine
Under the regulations of “Appellation Contrôlée” inexpensive “everyday” wine is made too. It is also popular and reliable drinking.

This region was classified by AC only in 1959. It is said that the best vineyards of Graves are in North of the region. The Graves lies to the south of the city of Bordeaux, in 1987 the area was given a brand of its own by AC: Pessac-Léognan. But the best known wine of the region is said to be the wine from the Château Haut-Brion area. Due to the classification it has exceptional good quality.